by Felicity Ruby and Scott Ludlam | May 16, 2022 | democracy, influence, lobbying 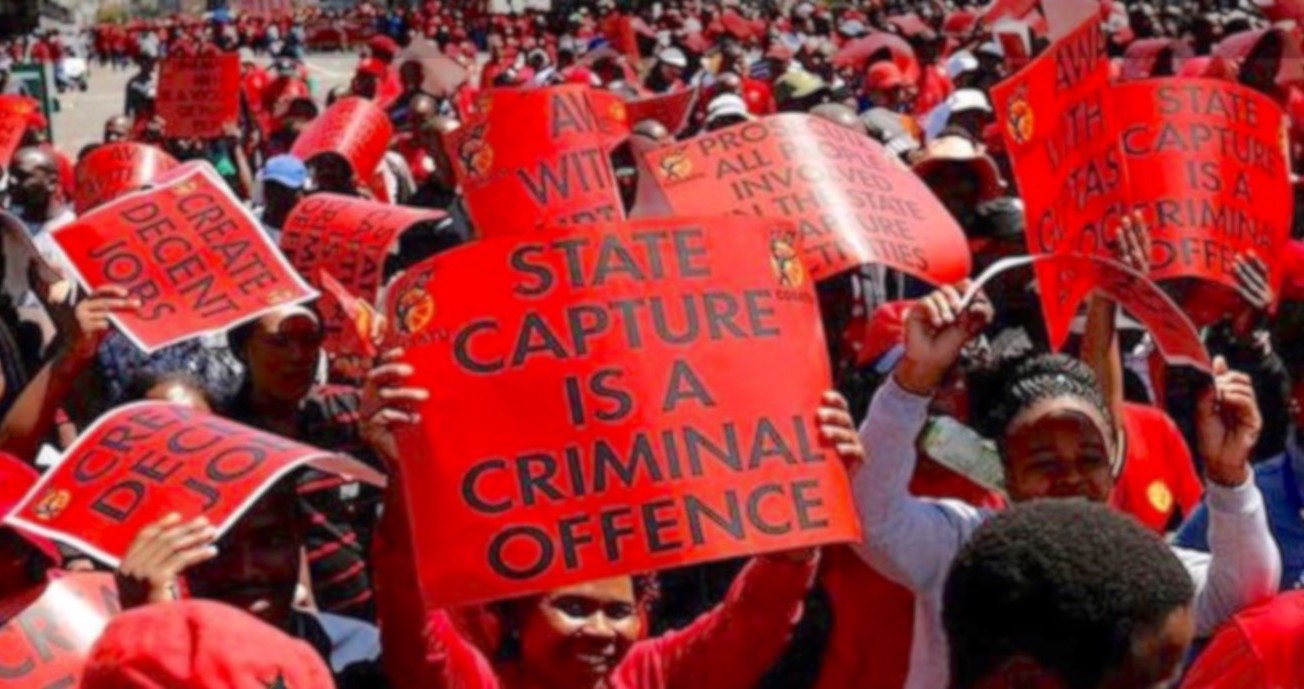 'State capture' by powerful corporate and political players is a major existential threat to democracy and communities across the world. It is fast becoming a major election issue globally, as pictured here in the presidential elections in South Africa in 2019. A State Capture Commission in South Africa in 2016 helped expose compromised and corrupted politicians and corporate figures. (Photo: Reuters)

‘State capture’ by fossil fuel, defence and other powerful industries is more systematic and entrenched than corruption but falls short of the definition of oligarchy, or corporate dictatorship. It exists in a distinct place in the middle, where private sector actors get hold of democratic levers to shape policy in their interest, no matter the outcome of elections.

The World Bank coined the ‘state capture’ phrase when observing private sector actors in former eastern bloc states shaping policies to serve their narrow interests. The power comes through control over resources, the threat of state violence, or other forms of influence on the judiciary, bureaucracies and government.

Fighting state capture at election time means voting for people who don’t bank cheques from the huge companies, and who are not part of the revolving door between industry and politics.

Opinion polling and the surge in volunteers working to elect independents and Greens indicate that more Australians understand that a big, uncaptured and raucous crossbench can restore some integrity to parliament and fight corporations undermining democracy.

The foundation of state capture is money: using it to fund political parties, buy access to decision makers and wage third party attack campaigns. Lobbying is then used to build relationships, either through consultancies, direct CEO-Minister contact, or peak bodies.

Revolving doors, the great merry-go-round or golden escalator, sees people working as Ministers or advisers one day and company directors or lobbyists the next, providing familiarity with process and people in decision making roles.

The mostly observable work of policy and research involves the think tanks, the ‘Big 4’ professional services consultancies, and industry peak bodies. They allow these companies to cover every Senate inquiry, every piece of legislation, and infiltrate every regulatory body – unlike affected populations, community groups or social movements.

Institutional repurposing occurs when public authorities like the CSIRO or Bureau of Meteorology, or environmental protection authorities or universities are hollowed out through placing industry people on the board, changing underpinning legislation, gradually diverting them from the public interest to serving private industry. Finally, there are the public influence campaigns that are run on traditional media platforms and social media.

When senior public officials and politicians ‘retire’ from public service and move into lobbyist roles in industry, they take with them an extensive contact network, deep institutional knowledge, and rare and privileged personal access to people at the highest levels of government.

Their presence in the private sector entrenches the influence of industry over policymaking and government procurement decisions – decisions that should be entirely unmoved by commercial imperatives.

The ministerial code supposedly requires ministers to not lobby government for industries connected to their portfolio for a period of 18 months, and yet some politicians don’t even wait before they have left office.

In defence of the realm

It’s not just ministers who seem to struggle on the Commonwealth pension, but also senior military and intelligence heads who pick up work with their former clients.

A key weakness in the Lobbying Code is that it only applies to ministers, and has no application to senior public servants, nor to MPs who have spent years on relevant committees.

While the defence and intelligence industries are renowned for making astute appointments of former ministers and senior bureaucrats, the fossil-fuel industries are also keen to exchange personnel with governments to share the knowledge and contacts that secure their deep influence.

The use of ‘institutional repurposing’

One of the most threatening aspects of state capture is the manipulation or ‘repurposing’ of government agencies set up to serve the public interest, through a process of board appointments, legislative amendments or cultural drift.

The Australian Renewable Energy Agency (ARENA) and the Clean Energy Finance Corporation (CEFC) have been persistent targets for repurposing by fossil industries. Set up as a key component of the carbon price negotiations in 2012, the two agencies were spared from abolition under Prime Minister Abbott along with the rest of the Clean Energy Act in 2014. Having failed at multiple attempts to abolish the agencies, the Government attempted repurposing instead.

In 2015, Prime Minister Abbott was unsuccessful in attempts to stop the CEFC from funding wind power. In 2020 the Morrison Government proposed the CEFC be permitted to fund loss-making investments in fossil gas power, handing energy minister Angus Taylor much greater discretion over fund allocation.

Angus Taylor has also issued regulations to force the Australian Renewable Energy Agency to fund technologies that are not renewable, like carbon capture and storage (CCS). In early 2021 the National Party proposed rewriting the CEFC’s mandate to include investments in nuclear, “high intensity” coal plants and carbon capture projects.

At CSIRO, the Gas Industry Social and Environmental Research Alliance (GISERA) initiative was launched in July 2011. Despite its CSIRO label, its research committees are heavily populated with gas industry nominees.

In July 2019 GISERA published the findings of one such closed study into fugitive methane emissions from the CSG industry, announcing that “Results of this latest research underline the potential climate benefits of using gas in place of coal to generate electricity…” APPEA and its member companies regularly cite this study, wielding the CSIRO brand against local communities and industry critics.

The Bureau Of Meteorology (BOM) was by 2019 taking $4.6 million in annual payments for services to the oil and gas industry, Shell, Santos, Chevron, and Woodside. Freedom of Information disclosures revealed that climate change was being routinely deleted from presentations on extreme weather events, “to even more fully meet customer needs”.

The Bureau’s chief executive was quoted expressing a view that ‘the Bureau should not be proactively discussing climate context’. This information was included in confidential discussions about an information video being produced titled ‘Bushfires and Exceptional Heat: What is driving our weather right now’.

Premier Palaszczuk had them fast-tracked and passed by October of that year: “The laws passed the Parliament with an overwhelming majority, including both the Government and the LNP,” the QRC noted approvingly the day after the bill’s passage.

Frustration with the string of failings and corruption of Australian democracy is widespread, but rarely described or understood as a systemic threat posed by corporations.

Australia will benefit by an understanding that what is needed are systemic solutions to deliver a healthy Australian democracy which works for all of us, not just for the powerful few.

According to the ‘Confronting State Capture’ report, there are practical steps that can be taken to reclaim our democracy. Firstly there is a need to recognise state capture as a systemic threat to Australian democracy. Secondly, all political parties and candidates should commit to legislating reforms under the Framework for a Fair Democracy.

Then there needs to be created political, economic and social consequences for the corporate powers and the political decision makers who participate in the tactics of state capture.  And finally, diverse civil participation at the heart of a healthy democracy must be protected.

The threat can be tackled by the Australian community because, despite all the malign forces acting against them, Australian voters can elect people who will not be ‘bought’ by corporate entities.

The threat has been recognised – and it is named ‘state capture’. Now it has to be fought: at the ballot box, in the boardrooms, and on the streets.

Both writers contributed to ‘Confronting State Capture‘, a report released by the Australian Democracy Network earlier this year, that sets out the framework for recognising ‘state capture’ and the steps required to help Australians better understand how state capture works, and making clearer the options for fighting it.

FELICITY RUBY is a PhD candidate at Sydney University undertaking research on surveillance and democracy. She is the co-editor of A Secret Australia: Revealed by the WikiLeaks exposés. View all posts by Felicity Ruby and Scott Ludlam

SCOTT LUDLAM is a writer, activist and former Australian Greens Senator. His latest book is Full Circle: A search for the world that comes next. View all posts by Felicity Ruby and Scott Ludlam