The weapons companies spruiking the ‘benefits and opportunities’ of the wars in Ukraine and Yemen and tensions in the South China Sea are infiltrating our schools. 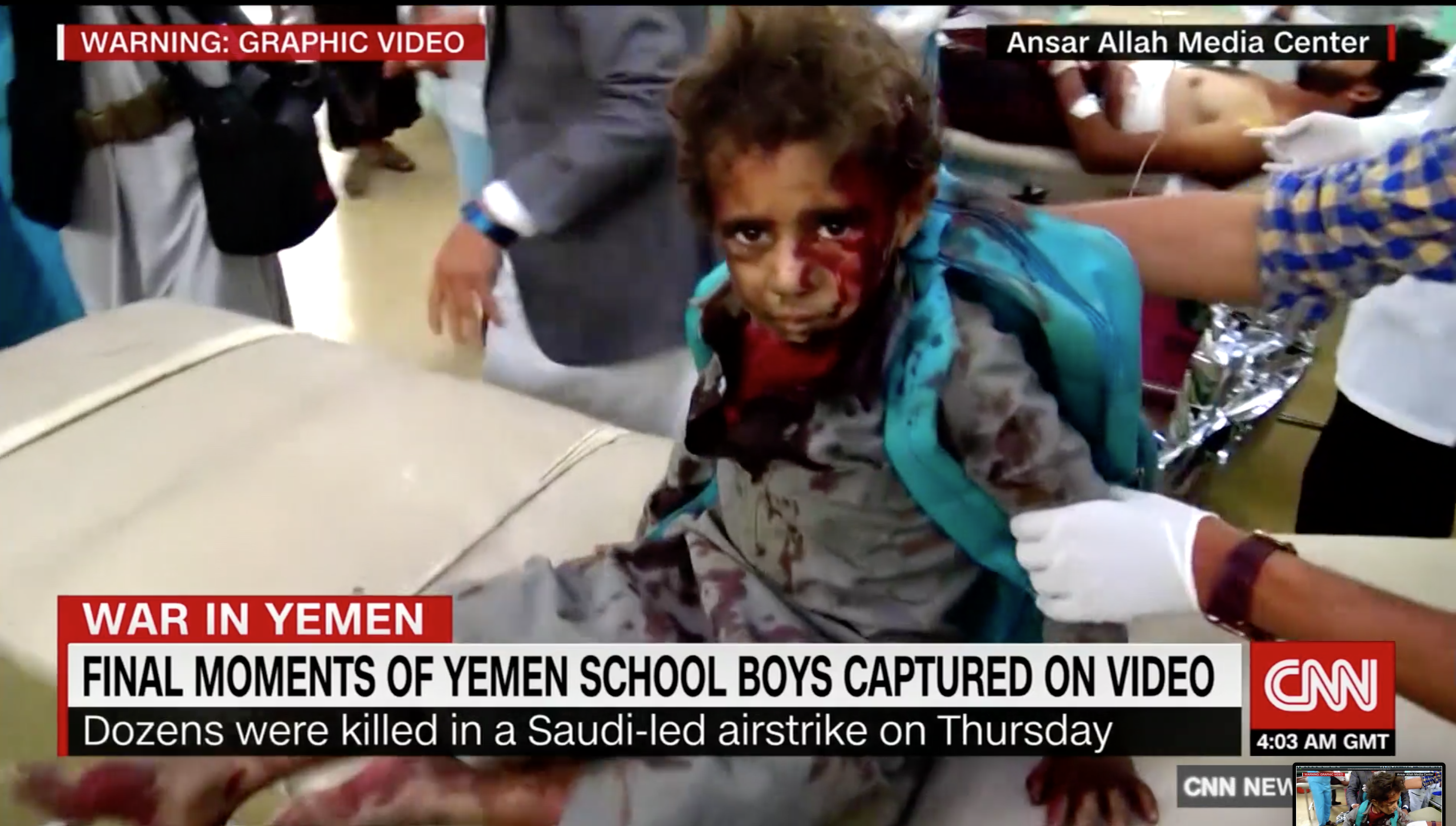 School children just like ours were the target of an explosion of a Lockheed Martin precision weapon in August 2018. The 230 kilogram laser-guided MK 82 bomb made by 'technical innovator' Lockheed Martin was sold for a tidy profit to the Saudi Arabian dictatorship for its ongoing illegal war against the people of Yemen. Forty school boys on an afternoon school excursion to a park were brutally slaughtered and dozens were injured -- including this small boy, here being treated for his wounds still wearing his schoolbag. (Image: CNN)

Lockheed Martin, the world’s largest weapons-maker, is raking in billions from ongoing wars like the four-week Russian invasion of Ukraine, and the eight-year long Saudi-led war in Yemen.

Meanwhile, in Australia, Lockheed Martin was busy cultivating kudos with kids as major sponsor of the National Youth Science Forum, a registered charity originally set up by Rotary.

Then there’s US missile-making giant Raytheon which now has a significant new manufacturing facility in Australia. It has continued to supply the Saudi-led coalition with weapons for the Yemen war, despite extensive evidence pointing to war crimes arising from its missiles being used to target and kill civilians.

In January 2022, a Raytheon missile killed at least 80 people and injured over 200 in a so-called precision strike in Sa’adah in Yemen.

Within days of this horrific incident, Raytheon’s CEO was telling investors that rising tensions represented “opportunities for international sales” and he fully expected to “see some benefit” from “the tensions in Eastern Europe [and] the South China Sea”.

There’s no mention in Australia’s media of the big profits Raytheon is making from the Yemen war, which has now entered its eighth year, killed or injured at least 19,000 civilians, and possibly many more, and also caused the deaths of tens of thousands of children through starvation, due to disruption of food supplies and militarily-enforced trade blockade.

Instead, we’ve seen pictures of Aussie school kids having fun with the Australian snowboarding Paralympian who Raytheon Australia hired to front the launch of its Maths Alive! educational exhibition.

And we also heard about Raytheon’s sponsorship of Soldier On and the Invictus Games, despite the irony of a weapons company using its support of injured military personnel as a public relations exercise.

There’s a name for this cynical behaviour by corporations: ‘reputation laundering’.

The world’s weapons producers have also taken to promoting themselves as ‘innovators’ in the areas of science, technology, engineering and maths, called STEM.

This enables them to target children and young people as future employees (see, for example, BAE Systems Australia, Boeing Defence Australia, and Saab Australia), often with the willing partnership of respected institutions. Many Australian universities now have MOUs, joint ventures, strategic partnerships, or other forms of collaboration with the weapons industry.

This enthusiastic support of STEM serves a double purpose: reputation laundering, and a socially acceptable way to promote the weapons industry as a future employer directly to children and their parents.

Promoting STEM education is essential to creating a well-trained workforce for key industries of the future, particularly those that can tackle the existential risks associated with climate change. The concern with the weapons industry’s activities in this domain is the way it is using STEM to target children as young as primary school age for weapons-making careers, often with the support of government.

The spin and glamour being associated with Australia’s increased militarism is a concern on several levels, particularly as the marketing omits pertinent information: weapons and warfare aren’t mentioned.

Nor is there information about how children might use their STEM skills to enhance the ‘lethality’ of their employer’s products.

Nor about a future in which the need for human involvement in the ‘kill chain’ is eliminated by creating autonomous robots to make life and death decisions instead. (This is not science fiction, these research and development programs are already happening.)

Working for companies involved with nuclear weapons isn’t discussed, either.

It is also likely to be weapons company marketing material if the phrase ‘solving complex problems’ appears, especially if accompanied by claims of ‘making the world safer.

None of these euphemisms conjures up realistic images of the bloody and brutal destruction the world is witnessing in the world’s latest war in Ukraine.

The ways global weapons giants have cultivated relationships with organisations of good purpose in Australia is highlighted in the following examples.

The National Youth Science Forum was created by Rotary, which remains involved. The Forum, now a not-for-profit organisation overseen by a board, has numerous programs, the flagship program being for Year 12 students interested in a career in science.

Each year hundreds of Year 12 students from across Australia complete the residential program, which introduces students to career pathways in science, and includes talks by Nobel Prize winners and other luminaries. Since Lockheed Martin Australia began as the Forum’s major sponsor in 2015, students also visit Lockheed Martin’s laboratories and speak with Lockheed Martin staff. The company renewed its partnership this year.

The National Youth Science Forum’s website does not disclose that its major sponsor is the world’s largest weapons manufacturer, by a wide margin, with annual weapons sales exceeding US$58 billion. Nor does the Forum make clear Lockheed Martin’s controversial role as one of the world’s largest nuclear-weapons-producing companies.

Nuclear weapons have been illegal under international law since January 2021 when a new UN treaty prohibiting them came into force. Two thirds of the world’s countries voted in favour of the treaty at the UN, including New Zealand. None of the nine nuclear armed states has signed it, nor has Australia.

“The ban treaty embodies the collective moral revulsion of the international community,” according to the Director of the Centre for Nuclear Non-Proliferation and Disarmament at the Australian National University, Professor Ramesh Thakur.

Lockheed Martin is providing these Australian educational bursaries through to the end of 2023, with an opportunity to extend.

Referring to Lockheed Martin as a “defence technology and innovation company”, the Gallipoli Sponsorship Fund’s website also does not disclose Lockheed’s status as the world’s dominant weapons-maker nor its position as a major nuclear weapons producer.

BAE Systems and The Smith Family

This example illustrates that public pressure can and does make a difference.

The UK’s largest weapons-maker, BAE Systems, has been working inside Saudi Arabia supporting the Saudi-led coalition’s role in Yemen since the start of the war.

A BAE maintenance employee was quoted in 2019 saying, “If we weren’t there, in 7 to 14 days there wouldn’t be a jet in the sky.” BAE Systems has sold nearly £18 billion worth of weaponry to the Saudis since the war in Yemen started in 2014.

Yet in Australia, BAE Systems started a $100,000 partnership with The Smith Family in August 2020, sponsoring a STEM education program for under-privileged children.

BAE’s role helping the Saudis prolong one of the world’s worst humanitarian crises in Yemen was pointed out numerous times to The Smith Family, a children’s charity, after news broke of its BAE sponsorship.

The Smith Family initially resisted but after increasing pressure and activism from peace organisations and many complaints from the public, The Smith Family soon dropped its controversial ‘partnership’ with BAE Systems Australia, mere months after it had started.

Benign-sounding sponsorships of Australian school children such as these might appear less self-serving if weapons companies behaved consistently and stopped supplying weapons to those nations known to be serial abusers of human rights.

Saying they are merely doing the bidding of their governments in supplying the Saudis, and other abusive and repressive regimes, as these companies have, is not a morally defensible position.

It is particularly not defensible in the face of evidence of ongoing war crimes being committed using their weaponry.

An earlier version of this article was published in Michael West Media in November 2020.

MICHELLE FAHY is an independent writer and researcher, specialising in the examination of connections between the weapons industry and government, and has written in various independent publications. She is on twitter @FahyMichelle, and on Substack at UndueInfluence.substack.com. View all posts by Michelle Fahy