A little reading, a little viewing 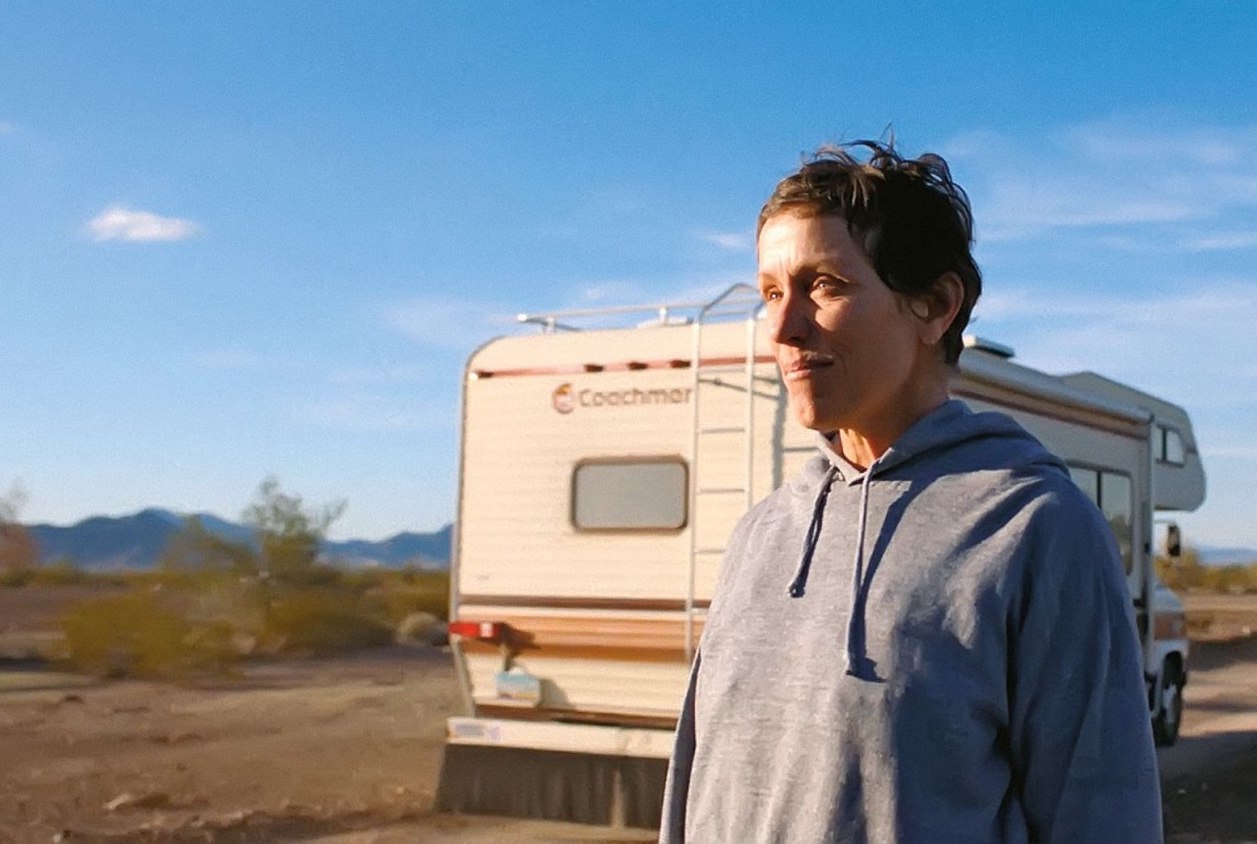 Hope and despair, alive in the face of Frances McDormand, in Nomadland. (Photo: Presskit)

Too pooped to read? We have two films to recommend first, before you summon the strength to open a book…

Nomadland, By Chloe Zhao (Available on Disney+ channel)
This portrayal of life could be a model for ABC’s 7.30 Report and Four Corners in showing the reality of life on the ever-expanding fringes of Australian community. Gig work, steep rentals, education out of reach, no real jobs, have pushed many to the edges. And to those lucky enough – and luck is all it is – to be enjoying a little holiday in Byron (or similar) this year, just look at the tents among the sandhills and the fogged up windows of vans in the picnic grounds – these are not holidayers or tourists, but the ejected detritus of modern Australian life, locals forced from their homes, living on casual wages, seeing no improvement ahead – but surviving on dignity and community. This is persistent and increasing, and media should not be turning away. Watch this and weep, I did.

The Dissident, by Bryan Fogel  (Available on demand, and on Prime & AppleTV)
Oscar-winning film-maker Bryan Fogel has made a startling film about the Saudi government’s murder of writer Jamal Khashoggi. One film critic said this film, “needs to be seen by as many people as possible, as soon as possible, as quickly as possible.” And the story behind Netflix refusing to screen it is equally disturbing.

Silverview, by John le Carré  (Available at your local bookshop in the fiction section, but it is closer to the truth than might be comfortable)
The imperial project of Western nations is now laid bare for us all by whistleblowers and intrepid journalists giving us unvarnished truth through the internet’s ability to see through the fog of ‘news’. In a time when no one can say, ‘we didn’t know’, the master spy-writer ultimately asks for us all, ‘what do you owe to your country when you no longer recognise it?’.

Changing of the Guard: The British army since 9/11 by Simon Akam.
This book faced a range of disturbing attempts to have it censored or diluted by a publisher and the UK military, and is a warning to all investigative journalists.

Reporter: A memoir, by Seymour Hersh
A riveting account from one of the world’s best investigative journalists, from Vietnam to post 9/11, it shows that independent methods and attitudes make the best journalists.

Island off the Coast of Asia, by Clinton Fernandes.
This under-read book shows us how Australia’s search for security is driven by the imperative of securing the economic interests of the US-Anglo empire. It is required reading for those interested in understanding Australia’s strategic and military future.

Gujarat Files: The Anatomy of a Cover-Up, by Rana Ayyub
One of India’s finest journalists documents the terrifying descent of the world’s biggest democracy into a Hindu rightwing dictatorship – this is the India of Australia’s new Quad alliance partner. Through her Substack, Washington Post columns, social media and book, Ayyub shows us what bravery looks like on a daily basis.

A Secret Country, by John Pilger
Since first published, nothing in this book has gone out of date. It remains the best laying out of how class race and power in Australia have led to oppression betrayal amnesia and resistance. A rediscovered gem.

Finally, enjoy the break, take a rest, gather your strength – the best is yet to come.

PETER CRONAU is an award-winning investigative journalist, writer, and film-maker. His documentaries have appeared on ABC TV’s Four Corners and Radio National’s Background Briefing. He is an editor and cofounder of DECLASSIFIED AUSTRALIA. He is co-editor of the recent book A Secret Australia – Revealed by the WikiLeaks Exposés View all posts by Peter Cronau and Antony Loewenstein

ANTONY LOEWENSTEIN is co-editor of DECLASSIFIED AUSTRALIA, and an independent journalist, author and film-maker who has written for the Guardian, New York Times and many others. His books include Disaster Capitalism: Making A Killing Out Of Catastrophe and Pills, Powder and Smoke: Inside The Bloody War On Drugs View all posts by Peter Cronau and Antony Loewenstein